What Can She Survive Without?: A Review of “This Boring Apocalypse” by Brandi Wells She struggles, tries to kick away and keeps almost kicking my face.
Stop, I tell her, or I’ll make you.

She doesn’t care. Keeps kicking. I grab her ankles and weigh them down with my legs, my body’s weight. I press my mouth against her knee. First one knee and then the other. It’s smooth, but tastes bitter, feels bristly and undercooked. I open my mouth wide and try to pull her, really pull her, until the thing I want is inside and therefore fully mine.

Thus begins This Boring Apocalypse by Brandi Wells, a terse, harrowing novel that is as aptly and succinctly composed as it is profoundly disgusting. Herein , a woman is brutally deconstructed by another woman, one body part at a time, through a nightmare universe where consumption is literal, cannibalism is naturalized, and “beauty” is an indecipherably gory paradigm. In short, Wells artfully describes a world that is (barely) a hyperbole of our own. People are parts. Parts are meat, flesh, and bone, which can only be accessed (and exposed) with violence. In the absence of flesh, people apply other layers to justify this violence: barbecue sauce, butter, suntan lotion, words and whisperings. This Boring Apocalypse is a gorgeously-messy exploration of this epistemic violence, tearing in, squirting on, stripping off, and serving up a repulsive meal of otherwise perfectly normal—even “boring”—language.

The novel explores an absurd and fantastical relationship between two women , one—the narrator—who is a seasoned consumer of human bodies, and the other whose body is acted upon. Their relationship primarily consists of the Other  being taken apart by the narrator and dismembered one body part at a time. Eventually, the narrator even begins to eat these individual parts of the other woman, roasting them with tanning mirrors. The narrator describes this dismemberment and consumption as though these were perfectly normal behaviors and the other woman, though often in pain, also seems to accept that the situation is normal . Through this relationship, Wells constructs a grotesque comparison between the experience of being a woman—objectified, dismantled into her most desirable “parts”—and the experience of being a “consumable” animal, a living creature systematically reduced to a “piece of meat.” So doing, Wells employs the theory of the “absent signifier” introduced by Carol J. Adams in “The Sexual Politics of Meat,” a theory rendered all the more horrifying by the fact that this “absent signifier” continues to live.

Wells’ other woman is forced to cope with continued existence as an “absent signifier,” rolling around as a limbless torso, consumed even as she is kept alive (in a bathtub of ice, no less). In one particularly gross scene, the narrator dehydrates the other woman’s legs and turns them into barbecue:

…The legs shrivel up inside the food dehydrator and the barbecue sauce dries too much to flavor the meat. I try to feed her the barbeque legs anyway and she eats because she is starving and she asks if I got the sauce from someone else and I say no. No. Of course I make my own sauce. I have a sense of pride. I would not shame myself that way. Sometimes people wander into my yard, asking for the sauce. They come with empty jugs, buckets, and sometimes they just cup their hands and wait.

After about half an hour she quits eating. She stares at the leg and then turns her head to one side, refusing to let me feed her any more. She can tell. She can tell by the bone, by its shape, that it is her leg.

Good for digestion, I tell her. I swear it’s the best thing for you.

Of course, in a weird way, this full-circle consumption and digestion—breaking down of these signs, breaking down of oneself—is indeed the best thing for anyone. After all, in this narrative world, the narrator is merely harvesting parts and fulfilling their intended use. Parts exist to be claimed, admired, and consumed, just as a milk cow exist to be milked and an angus steer exists to become beef. This economy of “parts” is far from simple, though. As this book demonstrates—through layerings of observations that are as empathic as they are outlandishy fucked —this violence is the juicy, bloody, devastating essence of our language.

Through  the relationship between these two women, Wells illustrates the complex beauty and desirability bestowed upon the “absent signifier,” illuminating the conflict implied by their weird living-dead situation. While a woman’s consumability makes her beautiful, she becomes less beautiful as her parts are consumed. The same mode of perception that makes her parts lovely enables her partner to eat them. She’s a tasty body filled with tasty parts. They just beg to be eaten! Then, once they are eaten (or used, or exposed,) there’s less of her that’s tasty. In the section fittingly titled, “She becomes less beautiful,” the narrator confesses:

It is hard to look at her. Her legs and arms were once strong and firm and expendable. I worry about her expendable parts now. How many are left? What can she survive without?

This is far from a simple dilemma, of course. The narrator worries about the aftermath of her desire, the sustainability of their love. What does it mean to desire when you are forced to take visual inventory of this desire, each time you act upon it? What does it mean to be troubled by your own desires?

The narrator comes to the disturbing but logically sound conclusion that to in order to be truly beautiful, one must always be beautiful, incapable of failure or decline. She begins by “practicing” this philosophy on herself in a section titled “To spite her, I practice being beautiful,” “holding in” her beauty for one minute at a time, then five, then ten, then half an hour before expanding to being “beautiful for days.” She then extends this philosophy to her lover, doing what she feels must be done to prevent her beauty from diminishing:

I cut off her head because it has become an inconvenience.

I am tired of her ability to decline. Without a head there are many things she will not be able to do and she will feel to me more like a possession and less like a responsibility. I do not know what to do with her head at first, but then I bury it in the ground. There is crying beneath the ground, but when we walk far enough away I can no longer hear the crying and I feel good about my decision.

Of course, even to live as a headless creature—to live at all—is an unbearable conundrum for those who desire to always be desired. When we love someone, we want to be consumed, completely. We want to be obliterated by their love. We long to belong with someone, within someone, to be—as Wells writes in the opening words of the book—“inside, and therefore fully mine.” This is something we struggle with, of course, this drive toward annihilation. But as Wells reveals in the scene of this woman’s final deconstruction, this self-abdignation, this abject resignation of legs, arms, bellies, breasts, and heads, this surrender to being eaten is what the world defines as love:

In spite of heart attacks, she is beautiful. She has always been beautiful, but now people acknowledge her beauty and their subsequent desire to consume her. It is something more, this desire to slip one of her hands or feet into their mouths. To suck and swallow, digest and enjoy…No one can contain themselves and they eat every bit of her. Teeth do more than scrape or graze. Teeth crunch and rip and there is a wet cutting sound. The separation of muscle and bone. Then the breaking and splintering of bones…Smacking lips and groans. The smell of over-full. The swelling of abdomens. The expansion of everyone to fit the pieces of her inside themselves.

In other words, love is painful. Love is violent. It fulfills us in a violent way. It swells and makes us sick. 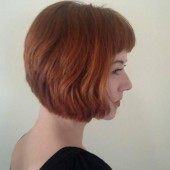 Meghan Lamb lives in St. Louis with her filmmaker husband, Jason, and her lazy dog, Greg. Her novella, Sacramento, was recently released on Solar Luxuriance Press. Her book, Silk Flowers, is forthcoming this year from Birds of Lace. Her work can also be found in Artifice, Pank, Alice Blue, Necessary Fiction, Spork, and Wigleaf.