What If You’re Rotten She told me not to hold grudges and not to have enemies. I listened to her about that one. I don’t know why. Stupid.

For six generations my family lived in the middle of Vermont, but when my mom turned eighteen she moved to California. She said she’d never come back, and she didn’t. Not until I was eighteen, and we got a phone call that my grandma had had a heart attack and died, right in the middle of the grocery store parking lot, a shopping bag full of oranges and coffee filters in her hand.

I had met my grandma once, when I was very little. I didn’t remember what she looked like, but I had two photos of her that I’d found in a box in the basement. In one of them, she was smiling in a bathing suit on a rocky beach; in the other, she was smiling in a long wool coat in front of a tall snow bank. In both of them, she gazed off somewhere far behind the camera; she looked like she knew something. In both of them, she looked just like me. The same nose, the same eyebrows, the same hips. The only record I had of my own history.

“Why don’t you talk to grandma more? Why don’t we ever visit?” I used to ask my mom.

“You don’t need to know your grandmother to know who you are,” she’d tell me. I didn’t believe her, but what could I do?

My mom made some phone calls, then we flew to Boston and rented a car to drive north. It was dark when we left the airport. It was snowing when we got to Vermont. When we drove up over the mountains, a slow white fog rose up to meet us and follow us through the dipping winding mountain pass. “It’s fine. I’m not afraid. It’s fine. I’m not afraid,” my mom murmured all up and down the mountain, knuckles white on the wheel, until the fog spit us out at the bottom. We drove through snowy farmland. We drove through a little town. We drove past a dark fire station, past a boarded-up restaurant, past a gas station with a few lonely Christmas trees leaned up against the wall, still waiting. We pulled into the driveway in front of my grandma’s little white house. Ice crunched under the tires and the radio went static.

The house was cold inside. My breath puffed out white in front of me in the dark wood-paneled living room. Mom turned on the heat, and pulled a stack of blankets out of a closet, and handed me a pile of sheets. “Here. There’s a foldout couch in the study. I’ll be down the hall.” I couldn’t stop shivering.

Outside, snow fell quietly and trees cast shadows like hands across the wall. I wanted the house to speak to me, but everything was quiet. I wanted my grandmother to visit me, but I fell asleep and dreamed about swimming in a frozen lake until morning, when I woke up, still shivering, all my blankets in a heap on the floor.

The funeral was short. The heat in the church was broken and everyone kept their coats on. I sat in the front row between my mom and my Aunt Kim, who had driven down from Montreal in the morning. The minister said that my grandma’s life on Earth was a life well-lived, and he truly believed that she had found all the peace and joy she deserved. He said that although we would miss her, she was now with God. Behind me, somebody coughed loudly. The organist played two hymns. My mom cried. My Aunt Kim didn’t.

In the receiving line, people with white hair and missing teeth and skin like paper told me that my grandma was a truly wonderful woman, and that I looked just like her. She was so caring, she’d done so much for the community, she was always such a role model: had I heard about her volunteer work in the schools? Had I heard about her campaign to build a new library? It was a great loss, but it was her time. She was in a better place now.

“Your grandmother,” said a small woman with white hair and watery brown eyes and a cane, “was the closest person to me in the whole world. I don’t know what I’m going to do without her.” I nodded sadly and let this teary-eyed stranger clasp my hands in her soft hands.

“That’s Sheila Gagnon,” my mom whispered to me after the woman walked away, “and she’s full of it. She and your grandmother hated each other.” I watched Sheila Gagnon hug another woman, take her arm, nod quietly.

“It’s true,” Aunt Kim leaned over to whisper. “Hated each other since before I was born.”

“Who knows? It doesn’t matter,” said my mom.

“This place is very small and very poisonous,” said Kim. “It can be cleansing to have a good enemy. Energizing. It can keep you going.”

“Seriously, who do you hate?”

They both looked at me hard. “Nobody, not really.”

My mom smiled. Kim sighed. “That’s a shame. Think about it.”

I turned on the television to the weather. I flipped to a commercial for an elaborate car scraper, then to a documentary about Jupiter’s moons, then to a grainy old movie about a vengeful woman trying to poison her husband. I turned on the light and got out of bed and sat down at my grandma’s old desk by the window. The drawers were full of old bills, receipts, gum wrappers, newspaper clippings, business cards, pens, driving maps.

I don’t know what you’re looking for, my mom had said to me in frustration once, years ago, when she caught me looking at my grandma’s pictures. I didn’t know either until I opened the bottom drawer and found a cardboard box with a thick stack of letters inside, beautiful slanted cursive on creamy stationery. They looked like love letters, until I picked up the first one and saw that it was from Sheila Gagnon, and so was the next one, and so was the next. Decades of letters from Sheila.

“Dear June – Everyone missed you at the Chases’ party last night. That’s because they all think they know who you are, but I can see the truth. I can see right through you.”

“Dear June – Congratulations on the new library building. It’s going to be very good for the town, and it’s going to look very good for you. You’ve built a life that looks a certain way, but underneath the surface there’s something very wicked.”

“Dear June – Just hearing your name makes my blood heat up. Hearing your voice makes me want to scream. They tell me I need to let it go, but I can’t and I won’t.”

In the morning, my mom asked me to drive to the gas station in town for a newspaper and some coffee and a pack of cigarettes for Kim. It had snowed again overnight. The roads were rough and there were no other cars out.

At the store, classic rock played on the radio. I stomped the snow off my boots, picked up a newspaper and waited at the register for the cashier to get off the phone. The bell at the door jingled and Sheila Gagnon walked inside slowly, leaning hard on her cane. She got in line behind me. She nodded.

“Your grandmother’s funeral was very nice.”

“I’ve been reading your letters.”

“Oh. Well. I’m sorry you saw them, but I meant every word I ever said.” I shrugged and turned around to pay.

As I turned to go, Sheila Gagnon grabbed my arm. “Wait. I have something for you.” She handed me a blue envelope from her purse. “I got this in the mail the day after she passed. It’s the last thing she wrote.” The envelope had already been neatly opened, and the paper carefully put back inside. I looked up at Sheila and she had tears in her eyes. “I don’t know what I’m going to do now that she’s gone.” I rolled my eyes. “It’s the truth. She was the only one here who ever really saw me. She was the only one who knew.”

I opened the envelope when I got back to the car: heavy paper with wildflowers printed along the top and bottom; my grandmother’s handwriting small and precise.

“Dear Sheila – I had coffee with Laurie Lafontaine last week, and she told me that you have a new granddaughter. Congratulations. Did you read the book I sent? The mother reminded me so much of you.

“I’ve been thinking about the first night we met. Do you remember, at the Millers’ barn party? I thought you were superficial and you thought I was flirting with your husband and we were both right. You aren’t special. You aren’t any better than this place. You are a viper. 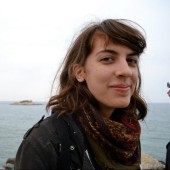 Claire Comstock-Gay writes horoscopes for The Rumpus under the name Madame Clairevoyant, and her fiction has appeared in Midnight Breakfast, Necessary Fiction, and Two Serious Ladies. She lives in Brooklyn, where she works with homeless youth.