What The Tallest Man Taught Me The tallest man in the world walks through the lobby of the Hotel Nacional in Havana, Cuba.

The tallest man in the world grimaces as he ambles awkwardly—no, painfully—on two metal crutches, through the lobby of the Hotel Nacional in Havana, Cuba, supported on each side by attendants, whose heads reach to the tops of his elbows.

Sultan Kosen is eight feet, three inches tall, thirty years old, a native of Turkey, and appears to float above the rest of us more normally proportioned humans. Gasps, and “oh my gods” in several languages buzz through the halls. Cells phones point and click. Someone holds up an iPad to take a photo, which always looks ridiculous.

Sultan, who suffers from pituitary gigantism and looks far from a picture of health, poses with onlookers, his record-sized hands draped around their shoulders like thick jungle vines. He wears a Cuban flag T-shirt and around his shoulder is a carryall with a tiny Cuban flag sticking out. A ball cap is on his head but because of his height I cannot see the logo on the front of the hat.

Later I will learn that Sultan has visited Cuba before, and even has his own special suite at the Nacional, outfitted, I hope, with a longer bed than I have in my spartan room. Rumor has it that he has been hired by management to walk around the lobby and grounds like some kind of greeter or colorful ornament, much like the peacocks who strut across the veranda overlooking the Malecón.

I wish I could report to you that I acted appropriately toward Sultan, and that I approached him as a human being with the full array of attendant emotions, hopes, and dreams as I have, and not simply as a freak. But I acted in a small-minded way. I gawked and gasped. I mean holy shit! An eight-foot man! So, like the other bystanders, I pulled out the cell phone that up to that moment was useless in a nation that offers little cell service. I rudely crab-walked in front of Sultan like a crazed paparazzi and snapped off several pictures. I did not ask permission. I did not say hello. I did not truly see him. I messed up and I knew it.

You might think I would know better. The preceding year I had watched a similar display of inappropriate gawking directed toward a work colleague whom I shall call M. I had first encountered M at a bus stop where a local express ferried us from a massive parking lot to our work at the center of a sprawling midwestern university. M was a little person and was, in fact, so short that when he sat on the seat his legs dangled a foot from the ground. His chest was large but his arms and, of course, his legs were very short. His head was normally proportioned. All his movements, even what we would consider the simplest of actions, like stepping up onto a curb, sloshing through fresh snow, or opening a door, took double the effort on M’s part. For every step I took he would have to take three. His face looked pained from the exertion.

Initially M’s appearance was startling to me, but later when I was moved to an office across from his we became friendly and I no longer noticed the differences between us. Often during the day, I would hear him in the corridor as he slowly climbed a flight of stairs, his breathing labored and raspy. I worried about him. At least once a day, he would come into my office, cup of coffee in hand, and climb into a chair to chat. He was a skilled gossip and I soon learned not to reveal much. In fact, I often became annoyed at his visits, as I would with anyone who interrupted my train of thought. But twice a year he would ask me to reach up, take down the wall clock above his desk, and make the necessary adjustment to the time. He never said why I had to do this although it was obvious. I always found this request touching. Soon we were riding the bus together back and forth from work, and when we disembarked I altered my gait to accommodate his pace.

One morning after a fierce snowstorm had dumped its load I noticed M was not on the bus. This in itself was not unusual, because sometimes M would take the bus at a different time or drive his specially equipped van to work to run errands during the lunch hour. My third-floor office window overlooked one of the busy sidewalks on campus and on this day I spotted M gamely negotiating the deep snow to our building. More than once he stumbled and pitched forward to the ground. Students were rushing between classes and giving M a wide berth as if he were a speed bump. But then I saw a gaggle of coeds stop not far from where M was walking. Almost in unison they took their cell phones out of their designer bags and started clicking photos of M as he struggled through the snow. They were laughing as they showed each other their photos, and no doubt posting them to their Facebook accounts. It was horrible to witness such brazen disrespect and insensitivity toward someone whom I liked. Surely M must have noticed, and I sadly imagine this was not the first time that his photo was taken in derision.

When he finally trudged out of breath into work he never said a word. Neither did I. But that afternoon, when he made his visit I was more patient with his interruption, and I even shared some juicy tidbits about the office.

But a year later in Havana I had forgotten all about M and the heartless coeds. All I could think about was how I just had to get a picture of the tallest man in the world. Lesson not learned.

As I get older and as I age not always so gracefully, I realize I’m not so special after all. I am like everyone else. The thought is frightening when it should be comforting. What I mean by special is not that I ever felt superior to other people (much to the contrary), but that I began my young adult years believing that I was unique—that the belief system I had concocted in my head was one-of-a-kind. I was separate from the herd. My long hair was a statement of rebellion. My fringe jacket the definition of hippie couture. Only I could finger pick “The Needle and Damage Done” on the guitar and throw the I Ching. John Denver sent me and thousands of Midwest Boomers to Colorado on a Rocky Mountain high, but I thought the move West was my own original, creative idea, never mind I had read “On the Road” eight times the year before my pilgrimage. I did not connect the dots from popular trends to myself.

Someone once said maturity happens when you realize there are other people occupying the planet with you, like, say, your parents, for example. This occurs when you realize, as I finally did, that tens of thousands of young people my age went “back to the land” in the 1970s. That millions of people play guitar and that a lot of them play better than you ever will. That those angst-filled words you penned in your journal while in a coastal coffeehouse were almost verbatim the words that your own generation—and generations before and after—were writing in their journals. That Zen Buddhism is an actual religion with years of rigorous discipline, not something you learn one weekend in a cabin reading Zen and the Art of Archery. (Guilty as charged.)

If I am unique maybe it’s because not everyone confronts a panhandler by shouting, “Hey, do I look like an ATM machine?” When I first used this line I thought it was clever. Edgy even. When I said it with my daughter and son-in-law looking on in horror, I did not think it was so clever anymore.

In those early, tender, unaware years, I seem to recall the word amazing attached to some of my more creative endeavors. But now, at a time when I never hear that word spoken in my direction, perhaps I was the one praising me. The occupation of writer with its daily dose of rejection and criticism will quickly disabuse you of any notion of specialness. Still, I must admit, sometimes I do miss being amazing.

Later in my Havana hotel room I finally looked closely at the photos I took of the tallest man in the world and my regrets began to surface. How I wish I had spoken with him, maybe bought him a Café Cubano or asked him about growing up in Turkey. Did he find Cuba, as I did, a beautiful, welcoming country with incredibly resourceful people and the greatest music on earth? Is his height a blessing or a curse? Does he feel special?

Sultan’s somewhat handsome face is long and lantern shaped. His dark eyes are kind if not sad perhaps because he has not been lucky with love. In 2009 he lamented, “It’s really difficult to find a girlfriend. They are usually scared of me. Hopefully now that I’m famous I’ll be able to meet lots of girls. My dream is to be married.”

The year after Sultan traveled to Cuba his dream came true when he married Merve Dilbo, a Syrian who is a mere five feet nine. “I found the love of my life,” Merve gushed, looking up at her handsome husband, who is gazing down at his pretty bride. They look amazing. 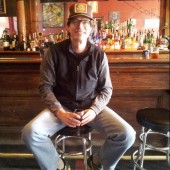 Stephen J. Lyons is the author of four books of essay and journalism: The 1,000-Year Flood; A View from the Inland Northwest; Landscape of the Heart; and Going Driftless. He is a two-time recipient of a fellowship in prose writing from the Illinois Arts Council and has published stories, reviews, essays, and poems in numerous anthologies and publications, including The Sun, Newsweek, Chicago Tribune, Washington Post, Salon, and High Country News.