When Chopra Takes Over The World: A Review of Rise of Hyponodrome by Matt Fuchs Imagine a mash-up of the murderous marital politics of Gillian Flynn’s Gone Girl and the AI-driven soft-focus romanticism of Spike Jonze’s Her with a dash of Isaac Asimov’s I, Robot and the contemporary self-help culture spearheaded by real-life lifestyle guru Deepak Chopra. Done? What you just imagined is probably something like Matt Fuchs’s s debut novella, Rise of Hypnodrome.

Grady Tenderbath is stuck. It’s 2039, and an unaging, centenarian, alternate-universe President Deepak Chopra and his Lifestyle Party control American politics and society by banning scientific innovation and promoting a holistic, wellness-focused lifestyle for all. Grady, however, is unhappy, despite state-mandated regular couples yoga. His marriage to successful scientist Karen is failing, as her career advances and his stalls in the romance novel division of Random House. Putting parenthood on hold until he catapults himself into boutique literary imprint Plant Bottle, he orders a personal robot named Andy off Amazon, hoping that he will help him unlock his potential and write the perfect proposal.

Not to mention, Grady’s paranoid friend, Sam, keeps lurking around the periphery, worrying about “hynodromes”—evolutionarily advanced beings who he believes may dominate the world—and insists that Karen’s genetic experiments may be related to them. Grady, fed up, reassigns Andy’s gender, so that he becomes Ashley. The newly female robot, who is more nurturing and intuitive, initially works wonders for Grady’s failing confidence, but all hell breaks loose as he falls for Ashley.

The best thing about the novella is the strangely plausible world-building. This is a dystopia rooted, in the best of ways, in our current moment. The Millennial yearning for a more authentic, wholesome lifestyle, as shown by the farm-to-table movement, popularity of Eat Pray Love, and growing suspicion of Big Pharma, could easily be twisted and darkened into Fuchs’s dystopian America dominated by an immortal-seeming self-help guru. Even the way scientific progress is subsumed by wellness as exemplified by the affirming Ashley has an analogue in such devices as pick-an-Apple-product-any-Apple-product. Think about it: we have devices in our pockets that hold infinite knowledge, and they’re often used to watch cat videos on a loop. Great for a pick-me-up in the middle of a stressful day, but what about doing something more substantial and big-picture with it? Even frustrated scientist Karen has something to say about how research and invention is misappropriated in personal-happiness-oriented America: “Happiness won’t prevent the economy from collapsing. It won’t stave off extinction. Why did we design robots to help you with your Planet Bottle portfolio, when we could have programmed them to figure out how to generate limitless amounts of green energy over a decade ago?”

On the other hand, while the limits of the premise may not merit a full novel, the work would’ve benefitted from maybe a couple dozen or so more pages to ground and emotionally deepen the love triangle at the center. Grady is adequately fleshed out in this marriage-ending, robotic ménage-a-trois, but the other two legs of this triangle are less so. What we have in essence is a watered-down Gone Girl-style marriage and Her-style extramarital affair jammed together in the same book, and the presence of both of these complicated, fraught relationships sucks up all the oxygen, so that neither relationship’s development is as exhilarating and satisfying as in the aforementioned works.

Throughout, the novella may have benefitted from a structure in which the chapters alternated between Grady and Karen’s points of views, perhaps with a chapter or two from Ashley. There’s this lovely little interlude that tells us how Grady met and fell for Karen while stargazing, but it’s not enough for me to feel the pain of their relationship’s disintegration and Grady’s final regret. She becomes bestial throughout the book, which makes sense from Grady’s perspective and as a metaphor for how failing romance makes your beloved monstrous in your eyes, but I wanted to see her humanity, her complexity, under the body-horror.

Ashley’s feint, meanwhile, towards humanity, self-awareness, and self-determination— are her feelings real or are they just Grady’s emotional projections?— is underdeveloped as she only is “born” about halfway through the novella, and her storyline has to compete with all the other plots already in play. What we see is tantalizing, intriguing, but we only see Grady and Ashley together a relatively brief amount of time before the apocalyptic events of the end. Perhaps this is intentional on the author’s part, and the ending hints that Grady’s feelings are ultimately misguided, but Ashley’s relatively lightweight presence in the book doesn’t really sway it either way.

The novella’s main issue is that it dresses up an all-too-common storyline, creatively blocked man cheats on his beastly wife with an ego-boosting younger woman and unleashes chaos, in sci-fi clothing. To Matt Fuchs’s credit, though, the unusual, vibrant doomsday setting that feels like it could arise from our current blind obsessions, our monomaniacal, gadget-driven focus on personal satisfaction at the expense of staring down the danger looming over us all, more than makes up for this fairly tired trope. 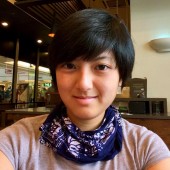