When It Was Funky In college I spent most of my time skipping class in a coffee shop set up in an old tobacco warehouse surrounded by bored liberal arts students and the Most Arrested Man in America. The roof leaked. The jukebox blasted George Clinton and Clarence Carter. Vagrants killed hours with secondhand paperbacks and board games. Half the house never paid. Anything seemed possible. The Most Arrested Man in America kept time.

Starbucks hadn’t reached Lexington. Keith owned the place and had a friend in Northern California willing to bankroll the joint on credit cards. The money would come, and until it did he could spend his days with sweet-natured misfits and intellectuals. No idea, so romantic and simple, ever works out. But for a short time, the place was filled with the best parts of life.

Hippy girls hung out in the corners with homemade cameras and little diaries filled with bad poetry. Line cooks played guitars and banged out ballads on an old piano. Everyone seemed to be working on a project that would never be finished. But we had music, Cajun food from a dive next door, and Henry Earl gyrating in the hallway where the concrete sank to ruts.

Henry Earl wasn’t famous then; that would come later. He’d shuffle in from the street in a fur coat, an old church suit, a sweater covered in stars, and bum cigarettes off us college kids. He’d shout “Ain’t it funky now!” and move in a violent groove. The way he smiled, hopeless in joy, made it impossible not to love him. We were play-pretend tramps, but he was a true heroic bum. “Shit, man, I’m just a drunk.” He was the most self-aware person we knew.

Most days we’d wait for him to stop in and lighten the mood. He danced to “A Man’s World,” and kicked his Salvation Army boots against the floor. Everyone had a story about him. A local girl band, Kitty Twister, wrote a song in his honor, “Henry Earl/I want to be your girl.” He was the first celebrity I knew.

Then things turned from losing to lost. Keith couldn’t make the rent. The comic book shop and the Cajun joint closed. The dance club upstairs got raided, and the cops walked away with a handful of strung out emo kids and baggies filled with E. Water leaked down from the ceiling and pooled in the hallway more each week. There was nothing to do but watch it fall apart. The spirit was taking Henry Earl as well.

“I got to get out of here man,” He told Keith one night when there was three or four kids listening to Ike Turner and playing Rook. “They’re going to get me.” We didn’t ask who they were, or if they existed. Sad drunk eyes see things good reason keeps from the rest of us. “I need to get to Florida.”

The next day we roused the regulars for money. I gave ten dollars toward the cause. The lit kids and banjo pickers put in what they had. John had just moved an ounce and was feeling generous. By the end of the day we had a bus ticket for Tampa, and the hope that one of us would find better times, if only in a Midnight Cowboy kind of way.

That night Keith and the boys drove Henry Earl to a bus station next to a strip club and a boarded-up Chinese restaurant. They’d picked up a shaving kit from Wal-mart, and he brought all that he had with him in a paper bag. But it got too real.

“I don’t know nobody in Florida,” He said when the nerves hit him. “They’ll kill me down there. They’d kill you.” The bus pulled off as he begged to blow the cash on lap dances.

The coffee shop folded by summer. Keith opened a new spot, but Starbucks had found Lexington by that time. Henry Earl stopped coming around. That’s when he got famous.

The internet made him a star when Fark.com pointed out that he’d been arrested over a thousand times and posted a link to all his mug shots. He was made for the camera. Scrolling through row after row of headshots you could see him ham and smile, look down with pensive eyes, or drop his chin like he’d throw a punch if you were to move one inch closer. It was all an act. Henry Earl was as kind as a stray puppy, and most of his jail time was out of Christian kindness on the part of the Lexington police. In the winter they knew he’d freeze if they didn’t pick him up, so they did; year after year, for decades.

After the second coffee house went under, and we all got old and took jobs at colleges or for the state, Henry Earl’s fame reached late night television. Jimmy Kimmel joked about his record from California, and promised to fly him out for the nation to praise. After weeks of trying, his producers found out that there was no way to move the man. Something we could have told them if they’d only asked.

Now Henry Earl legend lives on in Youtube videos and online forums. The tobacco warehouse is cut into condos. When I drive back to Lexington I always look for him by campus, and wonder if he still channels The Hardest Working Man in Showbiz. I picture him in a new leather jacket, fueled by grape wine and a funk that only he can hear. I hope those moments still exist. I love the way he danced; like a child, helpless, the way we all were before we knew better. 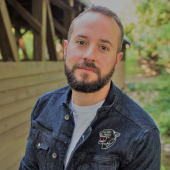 Michael Wayne Hampton is the author of three books: Bad Kids from Good Schools (Winged City Press), Romance for Delinquents (Foxhead Books, Winter 2013), and Roller Girls Love Bobby Knight (Artistically Declined, 2014). His work has appeared in numerous publications such as decomP, McSweeney's, and The Southeast Review. He can be reached via his website, michaelwaynehampton.com.