When the Indians Were Good When a Ritalin addled right fielder
more likely to pick grass than hit
his cutoff man could still have
a good eye. When grandpa still had
season tickets. When Uncle Brian
had a bigscreen next to his fish tank
and when October ball erased any
notion of bedtime. When Hersheiser
slow-motion growled into the break
between innings. When Albert Belle
pointed to his bicep. When Vizquel
could field anything. When we had
both Alomars. 1997: When a blown save
blew the series. When grandpa stopped
coming to Passover. When his marriage
disappeared, then his boat, then the condo,
then the season tickets. Then Hersheiser.
Then grandpa. When girls became more
interesting than baseball. When you had
to pick between a bat and a trumpet.

When, years later, you move to Kansas
and take a long time in the store deciding
if it’s okay to buy a Royals hat. When
Hosmer bolts for home banking on Duda
to miss and he’s right. When you watch
them (not us, never us out here) running
from campus to mob Mass Street and
climb the light poles, you’re happy
for them. You’re not part of them, if only
thanks to your own homesick neuroses.

When the Indians are on the cover
of Sports Illustrated to win it all.
When they don’t. When, as always,
Cleveland means good enough
to hope, but not quite good enough. 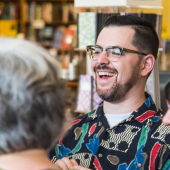 Danny Caine's poems have appeared in Midwestern Gothic, Hobart, New Ohio Review, and other places. He's a regular book reviewer for The Los Angeles Review and he's co-editor of Beecher's Magazine. Hailing from Cleveland, he now lives in Lawrence, Kansas where he works at the Raven Bookstore. More information at dannycaine.com.