Where the Dust Went In Beijing it dimmed everything faraway and lodged sharp and fine at the corners of their eyes and in splits deep under their thumbnails. At the airport the book she bought had dust pressed in its red vinyl cover and opened with the scent of a basement. She felt the book in her inside pocket, half as light as a Bible.

What are you going to do with that thing, John said.

We had to have one, Debra said. They’re going to be history.

In New York her skin stuck to everything it touched; subway seats, newsprint. The real estate agents were all out to rob them. Everything ran late. The least crooked-seeming agent met them at a factory they could get for cheap. It was blocks out of sight of the bridges. Children were kicking a soccer ball under the expressway. The factory had once made lamps, or something. John ran his finger along smooth potter’s wheels stacked along an inner wall, and pressed the trigger on an arc-welding machine.

We can line that wall with books, Debra said.

They could afford it, if she worked. She had stopped marveling that she did their accounting.

He built the shelves, the entire wall up to the ceiling, and a ladder to reach the top.

She filed her college books and his law books by author.

Where will the red book go? He said.

In travel, she laughed, and they filed no more that day.

The lowest shelf would be their daughter’s, and the next shelf, when she was tall enough, so their son could take the lowest, cars and trucks. John bicycled to work over the bridge. Debra painted scrolls for doctors’ waiting rooms and restaurants in Flushing Meadow. Their son’s first year at college she merged everyone’s books by author, Richard Scarry, Walter Scott, William Shakespeare, magazines separate; thirty years of Gourmets she had rarely cooked from.

Maybe now I have some time, she said.

Anything you cook, John said. All you need is that red sauce.

She found a recipe for spinach croquettes, only a tablespoon of safflower oil. John did like them, with extra salt and pepper. He kept mayonnaise marked JOHN in the office fridge, and a packet of English muffins, until in June a bakery opened, out of Debra’s sight.

You can bring in your bike, the register girl said.

Everything that week was on grand opening special. The register girl had her hair bandannaed the way Debra did when she was painting.

We’re too little to be grand, the girl said.

Atlantic Avenue was hot as car hoods. John was looking ahead to the girl’s gap tooth and Debra’s freckles, long faded except the one she’d had to remove, when a taxi,
gunning a yellow light, threw him left across two lanes into the Jersey barrier.

The children helped Debra pack, and paint the place to sell. That would cover her, for a few years. They sweated over takeout pizza. She would move out near her son. She couldn’t imagine, all the way to her daughter’s.

At the top of the bookshelf ladder, smiling, her son held up a red cover.

Did you guys buy this at the beach? He shook it out, and Debra knew.

Your father got it for me, she said. Once, when we were traveling. 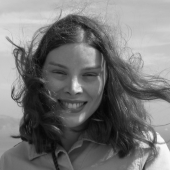 Sarah Malone's fiction has appeared in Open City, The Awl, Interrupture, and Wigleaf, among others, and is forthcoming in Keyhole Magazine, Fwriction Review and elsewhere. She is Editor of UMass Amherst's MFA journal, Route 9and Assistant Director of the Juniper Literary Festival. She blogs at sarahwrotethat.com.