My process of self-discovery began, formally anyway, when I was an upper-classman in college taking a philosophy class. It was the late 1960s; I was a philosophy minor, the professor a hip young man who managed to turn our impressionable minds inside out and also gave tough, comprehensive exams. I needed an A on the final for an A in the course. The morning of the final, he distributed the blue books, then the exam, which consisted of only one philosophical issue to address: using any method you choose, prove to your professor you exist.

He had tossed the proverbial curve ball. All of the various philosophers and philosophies I had reviewed, the essays I had reread the night before, clashed in my mind, then suddenly fell from it. Just like that Descartes, Spinoza, Kierkegaard, Nietzsche, Sartre…all the others…they all fell from consciousness. After a few minutes of reviewing what he had taught me about being an independent thinker, I scribbled my name on the front of the exam book, approached him, asked if we could speak privately in the hallway. He looked at me, sort of cocking his head as if to say, “What’s up?”, then walked with me out of the classroom, closing the door behind him.

“There’s a lot of material to cover for your answer, and you’re chewing up valuable time. Are you ok?” he asked.

“I’m quite ok, but wanted to take my final in private.”

Handing him my bluebook, I asked him to stand straight and rigid, face me, close his eyes, spread his feet wide.

“Because I am going to kick you in the groin as hard as I can. If you show no reaction, then I do not exist…and I fail the final exam. If you show any reaction, I consider that reaction an acknowledgment of my existence and I have earned my A. The exam directions you wrote and distributed did say I could use any method.”

He laughed, shook his head, then removed a fountain pen from his vest, marked a large letter A on the front of my blue book. Handing it to me, he said, “Have a nice Christmas break. I really enjoyed having you in my class, hope to again.” As we shook hands, I felt his firm grip, his large warm hand. I firmly believed both of us existed at that moment. This experience taught me a valuable lesson about my self, my life, who I was: creativity and intelligence and wit would serve me well in life. This had been a moment of self-discovery.

Time passed; I was nearing graduation with twice the number of required hours in my English major, but needing one more PE class to fulfill graduation requirements. I had waited to take it because back surgery as a freshman prevented me from taking my final required PE class. The PE department chair was insistent I wait, see if I could take something physical, such as weight training, basketball, or physical conditioning. When my surgeon nixed those choices, the alternative was for me to take First Aid…taught, of course, by the department chair/head football coach…my classmates mostly from the football team. Our course grade was based on exams covering the book (taken from the book actually) which I aced. The remainder of the grade was on papers. The first several papers I turned in all received a big, red, grease-pencil inscribed C on the top of the first page…with no other comments. I began to sniff favoritism. All my classmates got A’s–including the handful I helped with their papers. I suspected my papers were not even being read, that I was marked to earn a C no matter what I turned in. What the others received did not bother me, but I wanted what I was earning…assessed fairly.

For the final paper, I chose to do something statistical about sports injuries. Where charts and graphs should have been inserted in the data pages, on one page I reproduced a menu, complete with prices and food descriptions. At a glance, the page somewhat resembled a chart. Where credits and information should have been typed beneath the chart, I typed, “Dear Coach Ass. If you are reading this and bring it to my attention, I will take you and your wife to dinner. (You should hear your players talk about her, about you.) You can each select what you want from the above menu, and I will pay the bill, accept the consequences of submitting this paper.” I figured if he were reading my paper, he would have to respond. A week later, he returned the paper, without comment, just a big, red, grease-pencil C at the top of the first page. I got my C in First Aid; I don’t think I earned it. This experience taught me another valuable lesson about my self, my life, who I was: no matter how successful I have been, no matter what I know or have achieved, if someone does not like me or chooses to ignore my efforts, those actions will affect me, the quality of my life. Sometimes, only the present moment is of consequence. This was another lesson of self-discovery learned in college, unlisted on objectives of what I might learn on the way to a B.A. degree.

First Aid class faded to memory, and academic semesters turned to degrees, degrees turned to a college teaching career, marriage, a house, the birth of children, coaching third base, writing, divorce, collecting rare books, walking, fishing, grandparenting, burying friends and family, welcoming new friends…in short, life. I was too busy living to ponder in-depth the quality of existence, who I was. There were introspective moments at long traffic lights, when sitting on the porch swing at dawn sipping coffee, when taking daily long walks, but I felt comfortable in my own skin. To be certain, to paraphrase James Joyce, there were moments of pure epiphany: “Should I give up teaching and go to law school?”, “This marriage doesn’t seem to feel good anymore.  What do I do about it?”, “Wow, seems Val was just born and next year she starts college…”  There were others, but you get the idea. Then, one day, in my late forties, I took a weekend psychology class that required spending the entire weekend with thirty people I had never met.

The first learning activity was to have a four-hour, one-on-one conversation with a total stranger, telling the person about me. One caveat: there could be no discussion or mention of any definition of self via a role. No talk of being a teacher, writer, father, husband, son, friend, neighbor, softball coach, etc. This experience taught me a valuable lesson about my self, my life, who I was: although the roles I played in others’ lives was important in making me who I was, I was not the sum total of the roles. I was more: thoughts, feelings, ideas, frustrations, wishes, disappointments, dreams…the range, perhaps the depths, of what it means to be human. I felt like Lear in the storm, stripped of everything, coming face to face with a different glimpse of the reality of who and what I was. Most of how we view others and ourselves, I learned, is in relation to what we do or fail to do for others…and how we process that information, sort out fact from fiction, or at least their opinion from our own.

Eventually, the weekend class ended; soon thereafter another semester of teaching turned to a few academic years, eventually culminating in early retirement. Switch to the present:  now, as a boomer on a pension unshackled from alarm clock and time clock, I am in the position of again facing the abyss; I am engaged, at nearly sixty-five, in the process of redefining myself, reinventing myself: who am I now?

After considerable introspection and meditation, I arrived at my conclusion. Question: Who am I now? Answer: writer. Not a writer. Writer. As far back as my memory reaches, two of the most comforting–although sometimes uncooperative and frustrating–constants in my life have been breathing and writing. Both, I have finally acknowledged, are necessary for my survival.

From the first time I made scribbles on a sheet of scrap paper circa. 1950, and received adulation for it, to yesterday when Mike my mail carrier delivered a copy of Fine Lines Journal containing a piece of my nonfiction, I have felt good about myself, felt complete, when I write.

Writing has always “been there,” as in the often-quoted, well-known, “In the beginning was the word.” Although I know my interpretation of this sentence is far afield from the commonly ascribed meaning in the Gospel of John, the interpretation of this concept by the Greek philosopher Heraclitus revolves around the word logos rather than word. (I hope my philosophy professor is impressed I still remember this. Seems I earned that A after all.) In the beginning was logos…a term in the discipline of philosophy implying the creation of, the existence of order, of knowledge. When I write, when I muster the discipline to write everyday, I achieve order in my life. And writing, as I often told my students, is thinking. When I write I think, which sometimes leads to knowledge…knowledge about my life in particular or knowledge of the world in general.

I have been fortunate enough to be published, to receive some accolades and even payment for my writing. A realist, however, I recognize many write much better, have more success; some write less well, have had less success. It is  irrelevant to me that I have not made the bestsellers list, have not gone on a book signing tour, have not been invited on The Tonight Show to discuss my writing. All that would be nice, make my life different, but it isn’t why I write. Logos…remember?

I had been so busy writing or teaching writing that I never really stopped to understand its significance to my perception of myself until I truly heard and understood the lyrics to Harry Chapin’s song, Mr. Tanner, a wonderful ballad on Chapin’s album, Short Stories. Mr. Tanner is about a Midwest man who runs a cleaning shop, who sings as he works. Chapin’s lyrics sum up my relationship with the written word, with logos:

For a long time, and for the present, writer is who I am. With apologies to my philosophy professor and Rene Descartes: I write; therefore I am. 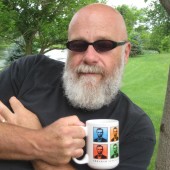