Wine for a Shotgun

Wine for a Shotgun and the Poetics of Raucous Restraint For years, Marty McConnell has been a fixture of the oral poetry world, performing as a member of seven National Poetry Slam teams, touring with her one-woman show vicebox, and appearing in the all-female poetry performance group Morrigan. In her debut collection, Wine for a Shotgun, McConnell explores new territory in bringing all the impact of her oral performances to the page in beautifully crafted, tensile lines. In Wine for a Shotgun, she walks an electrically charged high-wire between restraint and exuberance, silence and noise.

Many of the poems in the collection are admonitions about what one must and mustn’t do: McConnell frequently calls on the implied self to remember past wounds and old friends, but cautions against speaking about them or revealing too much. Running through many poems is the direct command to be quiet, to restrain. These admonitions are at times funny, as in “when your grandmother mistakes your girlfriend for a man”:

“do not rise up over the dinner table

or a burning flag. it is Christmas.”

But often these warnings contain a more serious undertone; McConnell is aware of how powerful a thing it is to put words to the most closely held secrets, and of the heavy responsibility of telling the most private of stories. In “when your very pregnant sister sits down at her own table,” the speaker is tempted to make her sister aware of her father’s infidelities (infidelities that, in turn, leave McConnell wrestling with the idea of fidelity in poems throughout the collection). Before she reveals her father’s secret, the speaker thinks the better of her impulse, scolding herself:

“…don’t lay all your sorrows

like kittens on the table, a litter of raccoons

scratching the polished top, their faces

so furiously bright, so perfectly masked.”

These are poems that understand the gravity of their subject matter, and that weigh the need to divulge against the need to protect. McConnell deals with her subject matter gently and purposefully, not with an approach that aims to shock or expose, but with one that aims, it seems, to heal. Many of the poems in Wine for a Shotgun hold this fine tension between immense honesty and conscientiousness, yet their restraint does not temper the spirit of these quieter pieces; instead, it invigorates them, making each painstakingly revealed detail sing not only with the beauty of its language but the exquisite difficulty of revelation.

If many of the narrators of the poems quash their words before they speak, so too does much of the book’s drama take place in secret spaces and hidden locations. Transformations take place in the privacy of the bedroom, while shining teenaged girls put razor blades to ill use in the secrecy of bathroom stalls. The characters who populate these spaces seem not to push back against the confines of their worlds, but to unfold there, taking surprising and beautiful shape. In “the Chariot in love,” a standout poem in the collection, the speaker’s female partner transitions into a male body by aid of hormones she injects while in the couple’s bedroom:

“there is a woman in my bed

with a body made of flowers.

she is dying. another part says, no

that’s how we sleep now.”

Yet for all the quiet tenderness in many pieces in the collection, in still others, McConnell adopts an entirely different voice and approach, sketching hard-nosed characters into dramatic situations that couldn’t be farther from the grandmother’s Christmas dinner table. “(T)he Magician is a drag king” puts “…a little freak in your Friday,” and in “the Emperor likes it rough,”

“the Emperor’s a sucker

for asphyxiation, for hot wax

and a good old-fashioned

Interestingly, the characters who are the noisiest, sexiest, and most raucous are often named for images drawn from the Major and Minor Arcana of the Tarot. In a character-naming convention that echoes that of Judy Grahn’s The Queen of Wands, figures like the above Magician and Emperor find counterparts in Temperance, the Eight of Swords, the Seven of Pentacles, and the Nine of Rods, each of whom has something daring or aggressive to say and a booming voice in which to say it. It is as though these characters, with their odd names and their often transgressive attitudes, allow the characters who sit quietly in those domestic, kitchen-table scenes to rise, larger and more exuberant than life.

Impressive and memorable as these uninhibited characters are, they tend to hold the reader at a distance, and their gruffness is at times an implicit challenge to the reader. McConnell truly shines when she allows the woman who has held her silence and the woman who is unafraid to demand the reader’s attention to merge into a single speaker, as in the collection’s closing poem, “the World’s guide to beginning.” The speaker at first swaggers and storms at an aesthetic arm’s-length:

“I was born in the obscene genius

of the club. I was a chemical

hero. slick as a greasy encyclopedia,

Then the voice quiets and draws the reader close, as though to confide:

is another word for survival. I learned to love

the body more for what it can do

than for what it is.”

This confluence of voices is a beautifully orchestrated closure for Wine for a Shotgun, perhaps because it not only finishes while it also begins; the voices that have been held back gain power to speak, and the characters who have stood aloof lean close to use, telling us what they’ve learned. 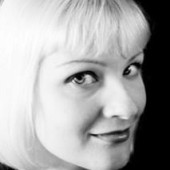 Kelly Davio is Managing Editor of The Los Angeles Review, Associate Editor of Fifth Wednesday Journal, and a reviewer for Women’s Review of Books. Her work has appeared in Best New Poets, Verse Daily, and others. Her debut collection of poetry, Burn This House, was published by Red Hen Press in 2013. She holds an MFA in Poetry from Northwest Institute of Literary Arts, and she teaches English as a second language in the Seattle area.