and Robinson Auditorium I left the earth

for a place where red lights turned green

and Die Fledermaus and The Knack’s

“My Sharona” fused into a teen-aged rat

whose skin peeled off his fingers from

the night before’s burning. But this end

of the story came late after Sunday’s

12-hour shift and the deep well of dead

air in my mind when the assistant manager,

Debra, left the receipts to find me standing

sink and I casually rinsed my hands in

poured out before me. Fortunately,

the flames were out and the heat now half

its four hundred fifty degrees, but my swelling

hands still stung and blistered while the cold

water and soap she rinsed them with cut

the grease and left me with two pink clubs.

I had the next night off, a school night

with tickets to the Arkansas Symphony

Orchestra and extra credit, but Debra

said her husband had something special

and I figured both were possible if I left

an understatement, and after three bowls

driven deep with a shot of nitrous oxide

to propel me beyond the edge of their

wallpaper, her hair brushing over my

shoulder on the leather couch, his hands

clapping to the beat of his laughter when

he realized they still had some acid left

somewhere in the bedroom, I remembered

my second engagement and saw where

this was going, saw a place I’d never leave

if I wandered onto that hypnotic stage,

a night I wouldn’t find my way home. 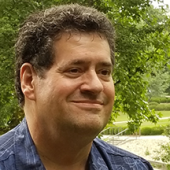 Jon Tribble is the managing editor of Crab Orchard Review and the series editor of the Crab Orchard Series in Poetry published by Southern Illinois University Press. His poems have appeared in journals and anthologies, including Ploughshares, Poetry, Crazyhorse, Quarterly West, and The Jazz Poetry Anthology. His work was selected as the 2001 winner of the Campbell Corner Poetry Prize from Sarah Lawrence College. He teaches creative writing and literature, and directs undergraduate and graduate students in internships and independent study in editing and literary publishing for the Department of English at Southern Illinois University Carbondale.