Christmas came twice in our home. In December, we dined on roast turkey and exchanged presents under a decorated, ceiling-high evergreen; on January sixth, like many Ukrainian Canadian families, we celebrated Sviatyi Vechir—Christmas Eve according to the Julian calendar—with the traditional Holy Supper, Sviata Vecherya.

My mother prepared twelve meatless dishes, including vushka, mushroom-filled dumplings afloat in blood-red borscht; an entire carp in aspic; and honeyed kutia made of wheat, walnuts, and poppy seed that always stuck between everyone’s teeth. Our feast’s rituals were adapted from ancient pagan beliefs once dedicated to fertility, winter solstice, and ancestral spirits. When the first star appeared in the evening sky, we sat down at a bountiful table, with an extra setting and an empty plate that symbolized our remembrance of deceased family members.

Unlike my mother’s parents, my paternal grandparents survived World War II, fled Ukraine and immigrated to Canada, where they moved in with their daughter and her husband and their three sons. They occupied a room in Aunt Luba’s house in Winnipeg, furnished with a solitary chest of drawers and a swaybacked double bed, the absence of decor intimating transit and impermanence. Babcia wore ankle-grazing dresses, Dziadzio outmoded three-piece suits—garments sewn decades earlier in a Galician tailor’s workshop—which gave them the appearance of time-travelers, half-departed, not of this world.

In a rare moment of unkindness, my mother once criticized the extravagance of her sister-in-law’s collection of fur coats. If her parents had been alive, she said—only to me, not to my father—she’d have bought a new bed and curtains instead, pictures and other pretty things, to bring joy and comfort to an old couple’s fading lives.

My mother may have judged Aunt Luba too harshly. Her aging parents-in-law had discarded all earthly desires, left them behind with cumbersome belongings in ostentatious chambers of a handsome house, in well-stocked storerooms and padlocked safes of a thriving firm, ceding everything to an encroaching enemy.

Walking sticks propped up nearby, Babcia and Dziadzio sat on chrome and yellow vinyl kitchen chairs, peeled potatoes, scraped carrots, and dried the dishes their daughter passed them from the sink. At Christmastime, they pinched dough with their knobby fingers and laid out vushka in orderly, flour-dusted rows. When Luba’s sons came home from school, they were queried about homework but I, their youngest and only female grandchild, was largely ignored. If Dziadzio spoke to me at all, it was to test my knowledge of arithmetic and, on occasion, he’d forget I was a girl:

“Son, what is the product of seven times seven?”

When I cavorted with my cousins in their garden, Babcia would call from a bench on the back porch:

“Come, rest, one day your legs will ache like mine!”

I’d cross an invisible border and enter my grandmother’s world. Sitting at her feet, I’d examine the cracked leather of her Mary Janes—little-girl shoes, but for their stacked Cuban heels. Before I ran off to play again, Babcia would demand a kiss and, when I placed it, reluctantly, on her parched cheek, she’d grasp my forearm with both hands and peer intensely at my face, as if searching for her girlhood in my eyes.

Dziadzio died of a heart attack midway between our two Christmases. On Ukrainian Christmas Eve, during Sviata Vecherya, I sat across the table from the traditional extra setting, and my grandfather’s spirit, far more vivid than the ghosts of the deceased relatives I’d never known, slurped borscht, bit into the soft dough of my mother’s vushka, and stared at me in silence.

Two years later, Babcia underwent an appendectomy. She lay motionless on the hospital bed, a human-sized doll with snowy hair meandering across starched, bleached sheets. We went home to decorate the tree; Christmas came and went, December ended, the New Year began. We celebrated Sviatyi Vechir, and my grandmother passed away in the morning.

At the funeral, I wore a black coat with a real raccoon collar, which received favorable comment from Aunt Luba. I should have been warm enough, but my thighs were sheathed in the sheerest of nylon stockings and barely covered by a scrap of a miniskirt, and I was shaking when they lowered my grandmother’s coffin into the ground.

The following Christmas, Babcia’s ghost appeared at the table, next to Dziadzio and the other departed souls. We ate borscht, vushka, fish in aspic, sweet kutya with honey and black poppy seed. From a large oval platter, the silvery carp glared at me with a milky eye, and I filled my belly with ritual food, while my ancestors sat in silence, waiting for the day I’d join them, on the other side of the gleaming, empty plate. 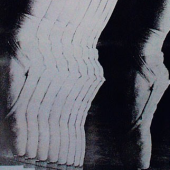 Born in Winnipeg, Canada, Genia Blum has lived and worked in Europe for over forty years and resides in Lucerne, Switzerland, where she is the director of a ballet school, Dance Art Studio, and presides over a dance foundation named in honor of her Ukrainian ballerina mother, Daria Nyzankiwska Snihurowycz. Her work, for which she was nominated for a Pushcart Prize, has appeared in or is forthcoming from Solstice Literary Magazine, (b)OINK zine, Creative Nonfiction Magazine (Tiny Truths), Assay: Journal of Nonfiction Studies, and Sonora Review. She is currently working on a memoir titled Escape Artists. She haunts Twitter and Instagram as @geniablum.