Vinnie raises his head and looks my way; deciding whether to be welcoming or dismissive. He sees my empty hand and settles on dismissive. He turns his back to me — his massive back.

This is not surprising to me. He’s a grumpy, middle-aged guy. He has to be prodded into exercise.

I go about my routine, unlock the metal cabinet; take out all of my gear. I pull out Vinnie’s gear.

I gently call, “Vinnie, want to come out and play?”

He snorts and faces the wall, his back still to me.

It doesn’t deter me; it happens all the time. We only get together twice a week and he’s not going to dissuade me. We are going to work together — whether he likes it or not.

He shifts his feet and pretends I’m not there.

I know what to do next. Even though I am 20 feet away, I slide my hand into my pocket, and gently rustle the wrapper of a piece of candy buried deep.

Vinnie is suddenly interested — still with his back to me; he cocks his head — his huge head.

He swings his body around, watching me. I move closer, Vinnie takes one step towards me. I pull out the candy and start to unwrap it. Vinnie takes another step, he is now downright eager.

In front of him, I open my palm slowly to reveal the unwrapped candy, Vinnie bends down and takes the mint with his velvety lips. He heaves a heavy sigh as I place the halter on his head. Vinnie has resigned himself to come out and play.

Vinnie lets me lead him out of his stall. Even though he towers over me, I lead him around by a thin piece of rope. He knows the routine and stands quietly in the aisle. Grooming, I have come to realize, is the most important part of riding. I make small circles with the curry, the hard rubber flat tool, over Vinnie’s whole body — from head to tail. He’s a little over 16 hands. His withers, where his back meets his neck, are well over my head. When he tosses his head up (if he’s upset or trying to get away from the medicine I give him) his head is good seven to eight feet in the air.

Grooming is a Zen practice for me — little circles, little circles, with the curry. Then I brush off the dirt and loose hair with a rhythmic flick of a hard brush — brush and flick, brush and flick. Vinnie sometimes shifts his weight to get me to a particularly itchy spot. He knows the drill when I raise his feet and pick out the dirt and manure that have become packed into the bottoms of his feet. He anticipates and starts to lift the next hoof as I walk around him. I lean into him, and he picks up his foot.

The saddle is heavy and a challenge for me to get on his back. I have to swing it high, over my head. Vinnie grinds his teeth when he’s unhappy. An alarmingly loud, concerning noise — like walnuts being crushed. He sees the saddle and grinds away. I’m careful to place and not drop the saddle on his back, and still he grinds his teeth. “I’m trying, you goofus,” I mutter. Another grinding of the teeth when I lightly tighten the cinch. “It’s not even tight!” I tell him for the thousandth time.

But Vinnie always takes the bit easy. He reaches for it. I smile to myself, he does enjoy working with me; he just doesn’t like to show it. Vinnie is stingy with his approval.

I lead Vinnie to the arena — if it’s a good day, he comes quietly, if it’s a bad day, he becomes stubborn and freezes in the aisle and I have to “cowgirl-up” and make him move, all 1,300 pounds of him. I have to show him I’m boss. I make him turn tight circles (which he hates), I back him up (which he hates more), and when worst comes to worst I smack him with the ends of the reins (he hates that the most) until he begrudgingly moves. I think he knows it embarrasses me when others to see me struggling with my big horse.

Today is a good day. Vinnie and I get into the arena and it’s empty — no horses that Vinnie dislikes (and there are horses he dislikes). Princess, a fussy paint mare, will drive Vinnie to distraction. If she comes too near, he pins his ears flat back against his head, grinds his teeth and ever-so-slightly angles his back end to be ready to kick out. Like I said, he’s a middle-aged guy with strong opinions.

Some days, Vinnie can be full of energy and ready to take flight. Quarter Horses are the fastest breed when it comes to short distances — hence the name, Quarter Horse. There are few things faster than them at a quarter mile sprint. On the days when Vinnie has too much energy, or something has alarmed him during the day, everything makes him nervous. He’s a prey animal, always on the lookout. He is jumpy and over-reacts to everything. Someone can sneeze and he jumps. A stable hand drops a bucket and he dances, afraid, lifting his head high. He spooks and skitters. I can feel his powerful muscles under my legs, ready to flee — the strong, pent-up energy under my legs ready to spring into action and take off.

That’s when I have to breathe, and not panic. I have to not think about the fact that he’s ten times my size and I’m sitting so high above the ground. I have to act like nothing is wrong. I have to find peace. I must find the string of fear that is usually taut and ready to snap in my core, and relax it in exact the moment I’m scared out of my wits. I release that cord, that tight, frantic urge to panic. I breathe. I force my body to act like it’s calm. And like magic, if I can do it, if I force myself to act calm, Vinnie becomes calm, he relaxes, and believes me, that there’s nothing to fear.

Vinnie is a living bio-feedback device. He knows how I feel long before I do.

I’m an anxious person and I now find myself, in my life away from the barn, using that same technique when I’m worrying about something. I have learned to release that cord of panic and fear. It has come in handy during meetings fraught with tension, or when I’m worrying about something out-of-proportion (what if my daughter gets a “C” in Pre-Calculus, her future could be ruined!) I picture myself sitting on Vinnie’s back, and force a sense of calm. I can feel that line of anxiety running through my core softening, releasing. Vinnie is much cheaper (and more effective) than a therapist.

But today, we are alone — just the noisy birds in the rafters above the arena. A brown and white dove has been blown into the barn during one of the summer’s storms and hasn’t left, a giant among the sparrows and barn swallows. The dove coos. The sparrows chatter. One of the birds has learned to mimic the clucking noises riders make when they want their horses to trot.

Vinnie is happy in the empty arena; he doesn’t grind his teeth as I get in the saddle.

I ride with my MP3 player, and Vinnie is subject to the order my playlist. There are songs we walk to (four beats to the gait), songs we jog (or trot – two beats to the gait) to, and glorious songs that I love to lope (or canter — three beats) to. When the loping songs play, I press my heel into Vinnie’s side and ask him to take off. We take off to the music together, in sync, through the air. I know realistically that Vinnie can’t hear the music from my earbuds, but it seems as though he can feel the music through me and we glide around the arena, matching the music in my head, together. Working together, thinking together, flying together.

When we’re done riding, I swing out of the saddle and loosen the cinch. Even though we’ve cooled out by walking around the arena, Vinnie and I are both still sweaty. We’re both worn out. Vinnie nudges me with his head and then places it on my shoulder, sighing. No teeth grinding, no spooking at random noises, no stubborn pushback. Vinnie is no longer stingy with his approval. He had a good workout too. 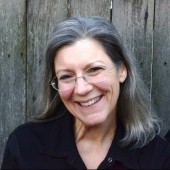 Amy Binns-Calvey lives, works (and rides) in the Chicago area. This past fall, she was a contributing author on Des Plaines River Anthology published by Allium Press of Chicago. She is a co-author/original cast member of the long-running Flanagan's Wake published by Dramatic Publishing. Other playwriting credits include Roasting Chestnuts, The Naked Show, and I Didn't Know George Gershwin Played the Piano. Amy is also a contributing author on several scholarly articles researching the impact of patient context in medical care published in medical journals including JAMA and the Annals of Internal Medicine. She has written articles for local papers The Forest Park Review and The Oak Leaves. Amy is a member of the Dramatists Guild of American and is a Network Playwright with Chicago Dramatists.