Today, as most days, I write in hushed tones: the wee lass sleeps in the next room. I’m hoping her nap lasts more than an hour.

The current poetry project, “World’s End,” explores boundaries. According to Wikipedia, “World’s End” refers to “A pub on the outskirts of a town, especially if on or beyond the protective city wall.” I’ve heard the term for some time, but was curious about its implication, given that our new residence sits outside of the immediate boundaries of Ottawa’s Centretown, where I had lived for more than two decades. The manuscript works to explore, now that I’ve wife and toddler, what differences might appear in an entirely new situation. In September, 2013, we purchased a house on Alta Vista Drive, an area known as a 1950s suburb, two months before the appearance of our daughter, Rose. After two-plus decades of Centretown, and full-time writing (I am now full-time with toddler Rose), what do these shifts mean for my writing, my outlook and my day-to-day?

I like the idea of exploring a new space, in the aspects of a new situation, a new geography, and the spacing and breath of the prose-poem line, as well as explorations into more politically-aware subject matter (ie – on issues of boundaries and land ownership). Obviously, I’ve multiple works that have explored geographies, from poetry manuscripts dealing with my Glengarry County origins, my reclaimed City of Ottawa, my Alberta year (as writer-in-residence at the University of Alberta, in Edmonton), and multiple other spaces researched and explored through a variety of writing projects. For example: a few weeks ago, the chapbook Texture: Louisiana, (above/ground press, 2015), comprised of a poem composed during the time Stephen Brockwell and I wandered around Louisiana for the sake of a reading, appeared in print. The poem allowed a variety of responses to the area, from the ability to research (including the connections New Orleans had to the War of 1812, which I was previously unaware of) and the many still-visible scars of Katrina, to the afternoon we sipped mint julips on a riverboat tour. It might be a rather superficial sketch of a journey, and yet I never want to explore any space in a poem as a “mere tourist,” but take a serious look as to where I am, and what this place, and these people, are all about. I always consider that if I don’t ask these questions of where I am, even if I never write a single word, then why bother going?

I spent six months reading up on Alberta history generally, and Edmonton history specifically, before my writer-in-residence year. I worked though non-fiction titles such as Myrna Kostash’s All of Baba’s Children (1976), and reread my Aritha Van Herk and Robert Kroetsch. I wished to have a sense of the space before I entered it, so anything I began to learn through being there would be better understood.

One of the poems in the manuscript-in-progress, the abecedarian “A perimeter,” explores directly the new geographic space of 1950s suburb, the problems of “ownership” and the consideration of seemingly arbitrary boundaries. The first section, “A,” reads:

and only fluid. Unless

you know precisely where. The skin

and space of white noise (hearth). One hundred foot of fence.

Language is impermanent. We retain nothing, have no

the yard and underneath the stone-work.

Curiously, one could even say that the length and breadth of my writing has been involved in “placement” in some way, whether exploring geography, culture, history, relationships, language or the notion of the self. Placement need not be limited to that geographic where or what. Poems in the manuscript range from writing around the new geography and the situation of full-time parenting, into other sections that float through both, and even into other kinds of territory. Sometimes the boundary is in the breath, the removal of the line break and the prose poem itself. I am outside the safety of city walls, both literally and metaphorically. What might these new lands afford me? Afford us?

I’ve been nearly half a decade focused on exploring new considerations of the line and the prose poem, influenced heavily by poets such as Rosmarie Waldrop, Norma Cole, Lisa Robertson, Lisa Jarnot, Catherine Wagner, Eric Baus, Pattie McCarthy, Sarah Mangold and others, including poetry translated from the French into English. After years composing poems that relied on a different kind of breath, and the serious line break, I’m curious as to what other options exist. “World’s End” is interested in a different kind of cadence, and a shift in perspective, to see what can be seen from an entirely different locale. Is the world still the same? Or is it different from here? 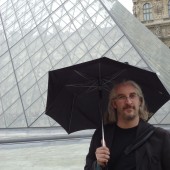 Born in Ottawa, Canada’s glorious capital city, rob mclennan currently lives in Ottawa with his brilliantly talented wife, the poet, editor and bookbinder Christine McNair, and their daughter, Rose. The author of nearly thirty trade books of poetry, fiction and non-fiction, he won the John Newlove Poetry Award in 2010, the Council for the Arts in Ottawa Mid-Career Award in 2014, and was longlisted for the CBC Poetry Prize in 2012. His most recent titles include notes and dispatches: essays (Insomniac press, 2014), The Uncertainty Principle: stories, (Chaudiere Books, 2014) and the poetry collection If suppose we are a fragment (BuschekBooks, 2014). An editor and publisher, he runs above/ground press, Chaudiere Books (with Christine McNair), seventeen seconds: a journal of poetry and poetics, Touch the Donkey and the Ottawa poetry pdf annual ottawater. He also curates the weekly “Tuesday poem” series at the dusie blog, and the “On Writing” series at the ottawa poetry newsletter. He spent the 2007-8 academic year in Edmonton as writer-in-residence at the University of Alberta, and regularly posts reviews, essays, interviews and other notices at robmclennan.blogspot.com. He currently spends his days full-time with toddler Rose, writing entirely at the whims of her nap-schedule.