Lauren meets me inside MoMA, next to the bag exchange at the 53rd Street entrance. The entrance doesn’t have a sign to let me know whether the museum is closed or open. Lauren’s just flown in from somewhere else. I don’t know where or I’ve already forgotten. I just know she’s been somewhere else.

When I see her she’s holding her black leather jacket and a small blue luggage bag that will both be exchanged at the bag exchange for a ticket, in a minute. She drops the bag and we embrace, me smelling Lauren and wherever she’s just come from and her smelling me. I don’t shower often but she’s used to it, or at least I tell myself she is.

“Where to now?” she asks, tugging at my arm as I bring her up beside me, on the moving staircase and toward the second floor. I’m wearing shorts and surfing slip-ons with no socks, and a bright yellow v-neck that borders on being deep v.

I always either overestimate or underestimate, I think, as the air-conditioner kicks in above our heads and around us, sending gushes of recycled air all through us. In the photo that appeared on Instagram an hour later, she is smiling with her eyes. Nose crinkled and almost crooked. Pale enough to seem see-through.

I hold her hand through a doorway that leads to a Warhol gallery, heralded with a blown-up roll of dollar bills. “That’s the thing about Warhol that I really admire,” I tell Lauren, who is only shaking her head. She hates Warhol’s work.

“I hate Warhol’s work,” she says. “I like technique. I’m an artist, or at least I try to be,” she interrupts herself. “I value technique. There’s nothing here.”

“I like Warhol for the same reasons I like you,” I say, and I kiss her forehead before she can say anything else.

“What are you saying?”

“Warhol celebrates the dollar at the same time he is opening it up to criticism, see?” I point with my crooked index finger toward the massive stack of green. “Anytime you blow something up, you’re also trying to make it disintegrate. I think,” I add, “that’s what he was doing. But then again the other thing I like about Warhol is his ambiguity. No one knows what the goal was—veneration, destruction?—not even him.”

“You never answered me,” Lauren says and tugs at my hand harder, through another room and out another exit, or entrance.

Lauren is from Gravesend, the “oldest place in Brooklyn,” she proudly told me once, but a place I only know in six o’clock jogs across Ocean Parkway before the sun comes up. On our first date, she admitted to me that she’d always felt different from the people and places she grew up around. I knew something about that too. It was nice to meet another stranger in a strange world and make that stranger into something else entirely. The world, at least, would always be strange. The artist’s job, or at least the work of art’s, is to reclaim it. Bring us closer to the uncanny and we see ourselves in its prismed image.

I’d invited Lauren to meet me at MoMA over e-mail because the clock was ticking. It always is. It doesn’t really stop. Today’s July 19, for example. Tomorrow will be the twentieth. A friend of mine, an avid reader, had been so kind to mail me his tickets to “Latin America in Construction: Architecture 1955-1980” three months earlier. It ends tonight.

William lives in San Francisco, with many more books, only a few of them mine, and would not get a chance to visit New York City until 2016, at the earliest. “Dear Chris, please enjoy,” he wrote on a loose-leaf he’d folded into the tickets. “Maybe you’ll find some use for these!”

To get there, we’d have to make our way to the very top, since “Latin America” was housed along with the other special exhibits, which included Yoko Ono’s “One Woman Show,” presented with the promise of exclusivity in the form of its block-lettered greeting: “ONE DAY ONLY!”

“Unless that is part of the show,” I say to Lauren, looking up from my brochure, which tells me it’s on view until September 7. “Yoko,” I say, “can wait.”

In the late 1990s, artist Zoe Leonard began documenting urban life in Manhattan’s Lower East Side. Using a 1940s Rolleiflex camera she captured vanishing mom-and-pop stores and their neglected products, as well as their re-emergence via recycled merchandise in Cuba, Africa, Eastern Europe, Mexico, and the Middle East. Almost all the photographs on view at Analogue depict storefronts and their cryptic signatures that begin to form its own narrative if you know where to look or how to look at them. Which has everything and nothing to do with technique.

“So sad, so sad,” Lauren whispers back, taking her time, lingering on a photo that shows:

Written in sharpie across a slab of cardboard and stuck to a storefront’s window.

“All the immigrants who came here, worked so hard to make a living and support their families …” she trails off.

I thought of my own parents who came here too, several years earlier than the late 1990s. They never owned a mom-and-pop shop.

“But everything comes back,” Lauren says, calling me to meet her at the end, where she’s standing, smiling, ruining the surprise for me. “You see? Poetic allegory of dispersion,” she murmurs in my ear, “renewal.” Lauren points at the final grid: forty-six photographs of old shoes, appliances, books, tchotchkes, and textiles displayed on sidewalks, blankets, and sheets of paper. Flea markets of other countries. I can feel her tongue, almost. I can feel her saliva. “So much better than Warhol.”

I am in the passenger seat of Lauren’s blue ’97 Acura Integra and reading Lauren a chapter about the day we went to MoMA to see the Latin America architecture exhibit, which was the day before.

“‘So sad, so sad,’” Lauren whispers back, taking her time, lingering on a photo that shows must sell all make offer written in sharpie across a slab of cardboard and stuck to a—” I orate from my iPhone.

“Can you change my name?”

“Why would I ever change your name?” I ask. People hold hands and briefcases, and a pack of cyclists whoosh around us. I put my arm out the window and try to catch the vapor, whatever’s past. “It’s memoir; I can’t do a thing like that.”

I’d been writing a memoir and using everyone’s real name. It was a marked departure from my novels, like when C-IN2 became Brieflies, and Wiktor became Viktor. It was all very illuminating, except when real life got in the way.

“I don’t want people to think I have another girlfriend,” I add. “Do you?”

Lauren’s either ignoring me or stewing, silently, unless she’s concentrating on the road because we’re lost and Grand Army Plaza is always a maze to pass through when you’re passing in a car. Three lanes become four lanes become two lanes as we round a bend. Everything eventually converges.

“Which way?” Lauren asks. “Which lane should I get in?”

We are heading to Rogers Avenue in Crown Heights, a place I’ve been before, except this time we’ll be on the roof, overlooking all the people holding hands and briefcases. Maybe also a few spare cyclists.

On the rooftop there’d be a lot of things to put in our mouths besides words. Beer, wine, champagne, filet mignon and pigs in a blanket and a corn salad that is perfect for summer (I’d seen photos an hour earlier). This is all thanks to David, my employer, one of them at least.

I’d been working for a little over a year as a maître D with no prior restaurant experience, except for the fact that I spend almost all my non-rent money on having experiences at restaurants.

That’s something else, isn’t it?

You know everything else about me by Googling my name, which is the only name like mine on the Internet. But I don’t think you know that.

Wikipedia tells you that I studied English literature and journalism at Lehigh University and graduated from the MA program at Fordham University in May 2013. It also says my work is affiliated with the Latin American neo-Surrealists along with Brion Gysin and his cut-up technique. “While also influenced by the historic avant-garde (Dada, et al.), the coterie that haunts his first trilogy of novels is the Situationist International.”

Haunt is a good word, I think, and so I let it move inside my mouth a little as Lauren swerves around traffic, cyclists, food vendors selling bananas four for a dollar. Four for a dollar? I bite my lip.

Before Wikipedia started curating my life, you could probably condense it in a line with one point being birth (1985, New York City) and one point being named Sexiest Man Alive (2009, New York City), in the Australian gay publication DNA. It felt as if I never did anything until I took off my shirt. Sometimes it still feels like I never did anything.

Wikipedia has become a religion in 2015, probably in 2014 and 2013 too, but definitely in 2015, because only two weeks ago, someone added “Living people” to my listing. Wikipedia, you have my blessing.

“Haunt,” I repeat, this time out loud as Lauren turns her head to me. “Haaaauuuunnnnt.”

Wikipedia reminds me of my own childhood fantasies. The Nineties TV movie starring Kirk Cameron whose character, a less-than-average college boy, accidentally gets electrocuted, only to re-awaken with the content of a computer encyclopedia in his brain.[1] The Computer Wore Tennis Shoes is a remake of a film from 1969, except Kirk Cameron is Kurt Russell and the plot, at least according to IMDB, sounds better. In that version, Dexter Riley is a problem-child who redeems himself by exposing the illegal business the small town’s big businessman is involved in. In the 1995 remake, Dexter uses his newfound powers to compete in quiz shows between various universities, where he sweeps all the points.

What I wouldn’t do for all that knowledge, I remember thinking, as a child.

“Anyway, I’ll think about it,” I say, turning to her and bringing my lips to her forehead.

“No you won’t,” she returns. “But it’s the thought that counts.”

I want to hug her from across the divider and cause a crash for a kiss because she really gets it. She understands where all of this comes from, I think. Where all of this needs to go. The way you go back to the oldest places, the places that are so sacred, whenever you want to really feel something.

You go away to go back.

“But seriously,” Lauren says, as she hits the directional at the corner of Nostrand and I hear the arrow ticking. “You’ll think about it, right?”

[1] When you think about it, The Computer Wore Tennis Shoes (both versions) were each so ahead of their time, too. Dexter Riley’s happy accident prefigures our current cultural cosmography. Our own minds are basically transferred and transferable to hard drives. A cloud or Cloud of electricity. There’s a name for this called “memory abundance,” except gigabytes and terabytes of digital memories will not make us care more about those memories, they will make us care less. Where has our memory gone if not into a screenshot? 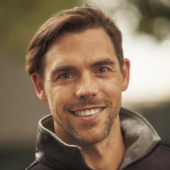 Chris Campanioni’s recent work has appeared in The Brooklyn Rail, Fjords Review, Prelude, and Rosebud. He has worked as a journalist, model, and actor, and he teaches literature and creative writing at Baruch College and Pace University, and new form journalism at John Jay. Find him in space at www.chriscampanioni.com or in person, somewhere between Brooklyn Bridge Park and Barclays Center.