You Are Invited to Watch My cable company robot delights
to invite me to Grit TV’s
car crashes, gun shots and explosions.
Being a robot, he doesn’t know
grit is clench and bear down,
for which women’s bodies are formed;
it goes with the backbone
our mothers teach us.
Grit is the sand that shapes our nails
and polishes calluses off our feet;
it’s what we vacuum
lest it etch the floors
with our comings and goings
carrying groceries, babies, sick dogs;
it’s the particles of years settled
into the armchairs where we
age, alone, while boys
play with explosives outside
believing they survive like robots. 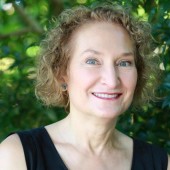 Sherry Rind's poetry books are The Hawk in the Back Yard and A Fall Out the Door. Chapbooks are The Whooping Crane Dance and A Natural History of Grief. She has received grants and awards from the Seattle and King County Arts Commissions, Pacific Northwest Writers, National Endowment for the Arts, and Artist Trust.