When the new kid shows up seven minutes late looking clean and downy pink, even under the fluorescents, do not call her out for running behind. Don’t glance at the fifties-style clock with its glowing orange neon when she’s in the middle of a long story that should be shorter (even if it is interesting, like about hospital sex with the injured quarterback or office sex with the older man). Any sort of body language that appears supervisory or bored or judgmental will turn her against you. And it would be good to go at least a month without having to teach another newbie how to make waffle cones.

Be likable. Call her by her name. Tiffany. But not too often, maybe twice per shift. More would sound calculating. Let her take samples of five flavors home instead of three as dictated by the corporate handbook. Even the new Peaches & Dream with Salted Butter Cashew. She won’t want to ruin her waistline. She’ll say, “I’m going to get fat.” But she won’t mean it. Girls her age are oblivious to their own physiology—the limits and the glory. For fun, make a game of pushing the samples on her. During slow hours, scoop Mojito Coconut Magic into the wax-coated paper cups and pretend to eat with her. Never swallow. Watch to see if her turquoise T-shirt stamped with the company logo—a jolly cow half-dancing across her left breast—becomes snug by this time next month. Most weight gain begins in the chest. At first she’ll be happy. Feed her more.

Be grateful for the double shifts; night commutes mean a seat on the bus, cozy chapters of Toni Morrison. Ignore the rust-colored stain on page 84. In the dim hall of your building, try not to touch the neighbors’ mailbox doors in reverse numerical order before turning the key to yours. If the urge is strong, think, Not today or You got this. When there are no letters—only two bills and a Value Pak of car wash and dry cleaning coupons—don’t slam the rickety metal door. If you do, Old Jenkins in 2B will yell, “That you, Cassie?” wanting you to walk his terrier, Marco. Your feet hurt from these cheap shoes. There are no coupons for better shoes in the Value Pak. Leave the bills in the box. Let the mail person imagine you at Disneyworld or Cabo. Slink past 2B, where Marco sits on the other side of the door whining to go out. Mouth the words, I’m sorry.

Stand an arm’s length from the microwave while your bowl of minestrone rotates. What a bright little room, the microwave. Fall asleep in your chair watching one of the DVDs you checked out from the library, the one about the persistent mother whose son played little league before succumbing to something incurable.

On her fourth consecutive after-school shift, Tiffany confides in you that her arms are like really sore from scooping and her back is massively tweaked from bending into the display freezer. Look baffled. Give the impression you can’t relate, even though you’re middle-aged and have callouses on the meaty trunks of your thumbs from eleven years of serving Triple-Nut Fudge Supreme to latently suicidal diabetics. Letting her believe you can’t identify with the physical demands of the job has nothing to do with winky coaching from corporate to curb their workers’ comp costs. This is another game to ease the tedium of ice cream sales. Staying positive will help her decide she likes the job.

Sound concerned when you say, “Want time off?”

You know she wants nothing less. She is saving for the shoes her parents won’t pay for, strappy stilettos to wear to the older man’s office. She showed them to you on her phone during yesterday’s slow hour, saying “Right?” But all you saw was the price: a week’s rent or a month’s groceries or six medical co-pays.

“No,” she says to your offer of reduced shifts. “It’s just like ouch.”

Nod and form the semi-smile you’ve been rehearsing in the mirror. Say, “Let’s dip into this Hawaiian Caramel Crunch.” Remember not to swallow. You can’t afford to buy bigger clothes.

Each day do less while she cleans the glass counters, refills the hot fudge dispenser, pours vanilla waffle batter. Although you have grown immune to sugary scents, lie. Say, “That smells so good.” During closing, count the money slow enough for her to finish mopping. Ask questions so she won’t notice how little you help. Where did she meet the older man? (In line at the Galleria food court.) What does she love about the quarterback? (His hair.) How did he break his femur? (Skiing.) Why—this is rude, but she loves it—does she date both of them? (The quarterback was the older man’s idea. A sort of alibi.) Her answers are like this, only longer. She seems to forget her sore muscles while she rambles about true love. The shop has never been so well-scrubbed.

Be surprised at the end of the third week when she consistently arrives on time and demonstrates an easy grasp of the handbook rules. Her intent on staying with the job puts her ahead of any of her shiny predecessors, and you wonder what is wrong with her and how someone with two boyfriends has time to scoop ice cream after school.

On your night off, while soaking your calluses in a bucket in front of the TV, ponder Tiffany’s stilettos and older man, candlelight between them, prime rib in their bellies. Imagine his necktie; his tall-backed chair; his wide, oak desk. Briny mouth and rough fingers. Epsom salt is easier than two men. Pour more hot water into the bucket. Swish your feet and say, “Epsom salt. Epsom salt.” Let the syllables play like melted Cherry Dolce Delight spit into a waxed paper cup. 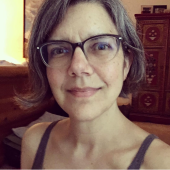 Ruth LeFaive lives and writes in Los Angeles. She is working on a collection of linked short fiction.