You'll Never Get Anything Accomplished on an Empty Stomach

P leaves before noon, her U-Haul driven by a friend of hers whom he’d never liked. When the van is gone from sight, he goes for a cup of coffee. They had fought about this in the end–his need to buy coffee when there was a perfectly good coffee maker in the apartment. Now it’s in the U-Haul going to New Jersey and he can do whatever he damn well pleases.

He’ll stay in the apartment, because he was there first. P’s new address is on the refrigerator with the only magnet left in the house. Maybe mail will come for her, and
maybe he’ll forward it.

People read The Times on benches in the park, even though it’s cold today. Soon, probably, there will be no paper version of The Times, no security blanket to carry on the train, nothing to reach for on the doorstep in the morning. With P gone, he will never have to recycle again, and there will be piles of Times around the apartment, so he will have one always.

On the way back from the bodega, the coffee cup warm in his hand, he pictures the apartment, without P’s shoes on the floor, her plants, her ink pots, her boxes of paints and negatives. In the living room now is just the TV, on top of the coffee table he’s had since college, and his leather chair, which he wrestled out of his parents’ garage when he moved to the city.

At the corner, there’s a boy in a prep school jacket. On the other side of the street is a round girl in a gray coat. When the light turns, she hustles, her breath coming in chunky clouds. As they pass each other, he shouts, “Maybe if you weren’t so fat, it wouldn’t take so long for you to cross the street.” Then he roars with piggish laughter and continues on his way.

For a moment, she looks like a doll, frozen, her eyes glaze, her mouth begins to twitch at the corners. Then a horn blasts, and she dashes into the park, where she disappears.

He stumbles back to the apartment, unsure if the last moments had really happened. The cold saturates his bones and settles in his feet.

Some mail comes for P. He knows this because Victor, his upstairs neighbor, has been dropping it on his door step. He can’t remember ever giving Victor a mailbox key, although it seems like something P would do.

For the last week, he has been calling in sick to work to sit in the leather chair and watch TV. He’s moved to piss, to put on a sweatshirt, and to eat some cereal, standing up, at the sink. He’ll have to leave the house soon, to get more cereal and milk, and toilet paper, unless he’s prepared to get creative, which he is not.

Friends call. “I’m sorry,” they say,“That’s rough, man.” He thanks them, it’s easier than telling them that he doesn’t miss P, that it’s better this way, and they had both known it. But if she had never left, he might never have known that people were capable of something so randomly, hopelessly cruel. The girl’s face is still in his mind, her features contorted, nightmarish. If P were here, if things were like they were in the beginning, they’d eat greasy noodles and she’d make him watch some bizarre foreign film that would distract him.

The Star Trek marathon ends, and he flips channels. An episode of Full House is on. The cheesy plot lines and attractive women (specifically, DJ Tanner in the late seasons) have become a freakish comfort.

In today’s episode, the Tanners are babysitting the kid next door, a large-headed baby named Tony. Everyone is charmed by this baby, except for Michelle Tanner, who is feeling jilted. Usually, he finds himself wishing she would catch on fire, but today, he’s weirdly empathetic towards her. “It’s okay, Michelle Tanner,” he mutters to the empty room, “you fight for what’s yours.”

He falls asleep in the chair. When he awakens, his neck is stiff. On television, there’s a man in a suit hollering into a microphone about Jesus’ plan. There’s a knock at the door. At first it’s gentle and cautious, and then stronger. “Are you in there?” Victor calls. His voice is low and kind.

When he opens the door, Victor is standing there, in a long coat and dark scarf, his hands in gloves. “I thought you might want to get something to eat,” he says.

He feels frantic. He smells like shit. Victor looks at him, expectantly. “Okay,” he says, imagining his rancid breath reaching Victor’s nose in a toxic spiral. “I just need a minute.”

From the shower, he can see the apartment building across the yard. P liked to stand in the tub fully clothed, searching with her camera for the right angle to photograph it. To him, the result never looked like anything, just a scrap of light, but she continued to take the pictures, hundreds of them. When she was loading the truck, the boxes of them seemed endless.

Outside, he is startled by the light, as though he’s been in a foxhole instead of in his apartment. The air is cold, and he is clean and tired.

Victor pulls open a door and warm air rushes out to meet them. There are long red tables, and women rushing around with steaming bowls. The bright letters on the menu read, “Noodles.”

They sit near the window, watching people outside. When the noodles come, they are fat and greasy and warm, and as the food fills his stomach, he begins to cry. 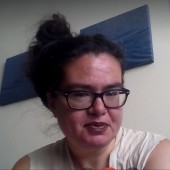 Chanel's fiction has been published in Glossolalia, Staccato, Dogzplot, Big Toe and Quick Fiction. She writes for the Sisterhood, Jewschool, Tablet, Oy Gay (at the Los Angeles Jewish Journal), and HBI: 614. She enjoys coffee, ambling, a good crossword puzzle and a reliable cardigan sweater. You can email her with comments, rage or concerns at chaneldubofsky@gmail.com.