1) The Paradox of Place “… if everything that exists has a place, place too will have a place, and so on ad infinitum”. – Aristotle Physics IV:1, 209a25

Where you are: Nowhere.  But everywhere is somewhere.  Every place is someplace.  Yet where you are: noplace.  It simply does not compute.

Before you, in a bluish light, a failing light, is a shotgun mounted on a wall.  This could be anywhere, and if it could be anywhere, that is as good as nowhere.  The shotgun is mounted on the wall in the room where you are standing.  Scarcely more enlightening.  The room where you are standing is in the house you purchased years ago.  Yet where are those years?  Where is your house?  If someone asked, as they might, where you lived, you could not respond, “In the rooms of my house;” although, upon reflection, that answer is more truthful than any other.  Perhaps.  The neighborhood: Fort Sanders.  Random fact.  And should you bring it up, you would most likely have to explain (oh, how you love to explain) the history of the name “Fort Sanders” (detail upon life-saving, life-affirming detail).  But sooner or later, you find, “Fort Sanders” is no better than “wall,” “room,” “house.”  The city: Knoxville.  The country: the United States of America.  Alas, there are ten Knoxvilles in the U.S.A.: Alabama, Arkansas, Georgia, Illinois, Iowa, Maryland, Mississippi, Pennsylvania, Tennessee, Texas.  You claim you are in Tennessee.  That the continent is North America which, before the Panama Canal, was fully connected to South America.  That these continents are in the Western Hemisphere.  (The Western portion, of a globe?)  On planet Earth.  That Earth is in the Solar System.  That the Solar System is in the Milky Way galaxy.  That the Milky Way galaxy is in the universe.  Yet where is the universe?  It must be somewhere.  It must be someplace.  Because if the universe is nowhere, then your precious details are meaningless.  And what of the place where the universe is?  And of that place’s place?  And of that place’s place’s place?  And so on.  Yet you persist: before you, you think, you believe, in a bluish light, a failing light, is a shotgun mounted on a wall.  False.  Before you, there is someone else.  Someone who resembles you, yes.  But not you.  No.  And before that person is a shotgun.  If the dimming light can be trusted.  Wherever it comes from.  If, indeed, it comes from anywhere.  If, indeed, it isn’t an illusion (anywhere being as good as nowhere).  An illusion as are “wall,” “room,” “house,” “Knoxville,” “Tennessee,” “the United States of America,” “North America,” “the Western Hemisphere” (!), “Earth,” “the Solar System,” “the Milky Way galaxy,” “the universe.”  And what potential can we find here?

Where are you?  Everywhere is nowhere.  Everyplace is noplace.  So what can happen here?  Everything.  Nothing.

2)  Achilles and the Tortoise “In a race, the quickest runner can never overtake the slowest, since the pursuer must first reach the point whence the pursued started, so that the slower must always hold a lead.” – Aristotle Physics VI:9, 239b15

Who you are: Sisyphus.  And the one before you before the shotgun: Anton Ulysses.  Yet character is defined through action.  You, Sisyphus, are inactive.  Your doing is the same as your not doing, and that, in turn, is your undoing.  Who you are: no one.

3)  The Dichotomy Paradox “That which is in locomotion must arrive at the half-way stage before it arrives at the goal.” – Aristotle Physics VI:9, 239b10

Happen?  When will it happen?

4) The Paradox of the Arrow “If everything when it occupies an equal space is at rest, and if that which is in locomotion is always occupying such a space at any moment, the flying arrow is therefore motionless.” – Aristotle Physics VI:9, 239b5

(Anton Ulysses has the shotgun.)

What will happen: nothing.

(Anton Ulysses has the shotgun.)

Even though Anton Ulysses has the shotgun.  For, in order to fire the shotgun, he would have to cock at least one of the two hammers, either of which may break or prove defective, although the weapon is of high quality, because, sooner or later, everything fails.  Then, once he has cocked one (or both) hammers, he must pull the trigger.  With a smaller gun, Anton Ulysses would have to aim.  But at this distance…ah, but the difficulty of distance has already been discussed.  So, perhaps Anton Ulysses should aim.  Provided that his aim is true, he would next have to pull one (or both) of the triggers which will unleash the spring(s) that has/have been pulled taut by cocking the hammer(s).  Much like the hammers, the triggers and the springs could very well malfunction.  Not to mention that to completely pull the trigger, Anton Ulysses would first have to pull it halfway halfway halfway, etc.  The spring would have to move halfway halfway…  The hammers would have to move halfway…  And if, somehow, Anton Ulysses is able to get the hammers cocked, the triggers pulled, the springs unleashed, the hammers pounding forward, still nothing will happen.  For the gun would have to be loaded, and the gun is never kept loaded.  The gun is usually kept unloaded.  It is possible that it has been loaded.  The gun is loaded.  You loaded it yourself.  It was a part of the plan.  Yet even with the gun loaded, the hammer still must interact with the shotgun shell.  A shotgun shell consists of the primer (the explosive cap), the propellant (gunpowder), and the shot (made of lead).  If the hammer strikes forward, it will hit the explosive cap (which must create a miniature explosion) which will ignite the propellant (if the gunpowder is properly packed and pure) into yet another miniature explosion which will perform the twofold function of (1) creating greater pressure behind the shot than the atmosphere applies in front of the shot (hence, sending the shot forward), and (2) fragmenting the aggregate of shot (contrary to a bullet which is a single projectile).  Yet the likelihood of any of this happening is low (see the previous sections).  But even if it should happen, even if the gun mechanism and the shell mechanism all, against the odds, operate perfectly, still nothing will happen.  For the shot must have been manufactured properly.  Shot is made by pouring molten lead down a shot tower (such as the Sunsphere Shot Tower in Knoxville, Tennessee (wherever that may be) that is 234 feet tall and made of brick (to add more random details)).  As the molten lead descends, air pressure makes it round (the taller the shot tower, the greater the air pressure, the better the product).  The now round pieces of molten lead then cascade into a pool of water in order to cool.  Once cooled, the balls, the shot is filtered through screens so the balls of the same size can be collected, so the irregular shot can be re-melted down, can be put back through the process.  The chances of any of this happening successfully: zero.  First, it involves a worker leaving his home and going to work (impossible); it involves the worker making his way to the container of molten lead (doubly impossible); it involves the worker ascending a tower (trebly impossible); it involves the worker pouring the lead down the tower (quadruply impossible); it involves the lead falling through the tower (quintiply impossible) and reaching the pool below (infinitely impossible) and then being accurately filtered through screens so manifold shot balls do not cause a shotgun jam (absolutely impossible).  But even if this entire ordeal were possible (and it isn’t…at all) still nothing would happen.  For the principle behind the gun is that it will move lead through a target.  Yet in order to move, the shot must not be at rest.  Yet all objects that occupy a space are at rest whilst in that space.  The lead which appears to be moving through the air, then, is actually stationary, and no more likely to injure you than the worker is likely to make his way to the shot tower early in the morning for another day of work doing…

What?  What can be done?

5)  Paradox Solved “The solution to all of the mentioned paradoxes, then, is that there isn’t an instant in time underlying the body’s motion (if there were, it couldn’t be in motion), and as its position is constantly changing no matter how small the time interval, and as such, is at no time determined, it simply doesn’t have a determined position.” – Peter Lynds “Zeno’s Paradoxes: A Timely Solution”

You are falling.  You do not know how.  You do not know why.  Your arguments were perfect.  Your logic, flawless.  Noplace.  No one.  Never.  Nothing.  But just before you hit the ground, the ground which seems so far away, though it is not far away, as if you were descending from an airplane, you think: 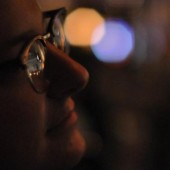 Andrew Farkas' Self-Titled Debut, a collection of stories, won the Subito Press Book Competition and was published in 2008. His work has appeared or will appear in The Cincinnati Review, Another Chicago Magazine, PANK, Quarter After Eight, Artifice Magazine, and elsewhere. He currently lives in Chicago, a city whose nicknames don't mean what you think they mean.