When she was fourteen, Marsha announced that her favorite woman in history was Ethel Rosenberg. Not because Marsha believed that Ethel was innocent and noble—noble because surely she could have pretended to know more about her husband’s guilt and earned a reprieve by making up stories. Nor because she believed Ethel was guilty but noble—in this case, “guilty” would mean for some that the woman was brave enough to put her own life in danger to live her values, but this wasn’t Marsha’s thinking. Guilty, not guilty, whatever. And noble? Seriously… noble? Marsha didn’t care to guess whether Ethel had spied for Russia, or what, exactly, was in her heart. Ethel was Marsha’s favorite woman in history because it took five blasts from the electric chair to kill her.

She wrote a poem about it: “Scorch.” The school’s literary magazine accepted it for publication and requested accompanying art, which Marsha was glad to supply. She teased her long hair out to the size of an umbrella, then got a friend to strap her to a dining room chair with a few leather belts. They chose the photo most washed out by sunlight streaming in from the kitchen window. Marsha’s over-lit face was pallid, the teased hair collected the haloing sunshine. Her mother was horrified, for once, beyond words. Her father said what he always said: Just don’t sleep with the football team. For weeks kids jabbed Marsha in the ribs while making the buzzing, ripping sound of electric shock. She didn’t mind.

By the time she headed to college, Marsha had moved on to Collette, Marie Curie, Eleanor Roosevelt. Altogether a much higher class of person. Noble, even, one might say. Artistic talent, smarts, good works—all now trumped the capacity to retain a heartbeat through the repeated application of 2,000 volts.

Still. On heavy days gone gun-metal gray, when a thunderhead gathers and then, in a furious instant that always comes sooner than she thinks, splits the sky, Marsha slows whatever she’s doing. Slows, slows, and then stops. To wait. To count. In these moments she is exquisitely aware of her breath, her heartbeat, the tingle in the palms of her hands. She tastes copper at the back of her throat and then returns to movement by shaking her head in admiration. Five times.

On a gun-metal day, once the danger has blown to the side, she tosses Ethel a kiss. And she wonders why, guilty or not guilty, why old Ike and friends were driven to fry her, this plain dumpling of a woman, who had once dreamed, like most teenage girls, of stardom on the stage, but who organized a union instead.

*Ethel and Julius Rosenberg were convicted of spying for the Soviet Union, and both were executed in 1953. His conviction is generally considered just, but Ethel’s guilt is still disputed. 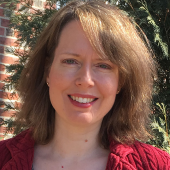